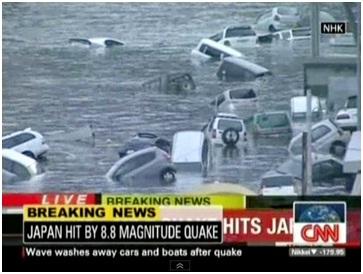 The day the quake hit Japan
I was in Japan when the devastating earthquake and tsunami hit Japan on March 11, 2011. DNA asked me to jot down my initial impressions which were published in the newspaper the next day.

The day the quake hit Japan DNA / Vikas Swarup / Sunday, March 13, 2011 2:26 IST At 2.46 pm on Friday, I was in my office in Osaka when the earthquake struck. The consulate general of India is located on the top floor of a ten storied tower in the central business district and I could sense the building swaying. It shook for a full two minutes. “It’s an earthquake!” I exclaimed and rushed to my colleagues. The Japanese staff seemed supremely unconcerned. They are so used to quakes that they don’t notice them anymore. Even in my 18 months in Japan, this was the 4th time I was experiencing the ground shake. The first sign that something was different this time round was when the mobile network went down. We checked the internet and discovered that a powerful earthquake had hit the coast with a magnitude of 8.9, the strongest ever recorded in Japan. I immediately called up our embassy in Tokyo. The phone lines were clogged and I could get through to the deputy chief of mission only after twenty minutes or so. “I am wearing my helmet and just about to rush out of the building,” he told me. “Would you inform Delhi that we are all safe?” I called up another friend in Tokyo. He was in a supermarket at the time. “It was crazy,” he said. “There were cans falling off the shelves, bottles breaking. I’ve been living in Tokyo for twenty years and I’ve never experienced anything so scary.” Another worker in a high rise said she thought she was in a swing and about to die. The news channels were full of disturbing reports. We learnt of commuters stuck in underground trains which had stopped running, office workers trapped in elevators, students stranded at school. A colleague recounted how the grand piano in her house shifted a full ten feet. Elsewhere in Tokyo paintings fell down, ceramics broke, televisions shattered. The worst was that people couldn’t speak to their families because the overloaded mobile phone network could not carry most calls. Yet, there was no panic in Tokyo. Amidst the sirens of the fire trucks and the din of loudspeaker alerts, people spilled out into the streets and rushed to the city’s ubiquitous 24-hour convenience stores, buying up milk, bento boxes, sandwiches and instant noodle cups, but they still queued to get into the buses which continued to run through the congested highways. More importantly, despite the quake rattling buildings in central Tokyo, causing at least ten fires and flipping a few vehicles on an expressway, there was relatively little damage. Ancient builders considered earthquakes to be the manifestation of the wrath of gods and, therefore, impossible to resist. Modern day architects, however, have become adept at building structures that can resist an earthquake with minimal damage. Our brand new Chancery building in Tokyo, for instance, rests on hundreds of frictionless rollers. When the ground shakes, the rollers freely roll, but the building above is protected from a damaging lateral impact through base isolation. Moreover, the Japanese have learnt to live with their geography, developing one of the best advance warning systems and an extremely efficient manner of moving people out of danger. Disaster preparedness and civil protection is ingrained in Japanese administration and culture. Nevertheless, the morning after brought news that 202 people had lost their lives and over 1,000 were feared dead in the tsunami that followed the earthquake, surging across rice fields and highways, engulfing entire towns like Sendai, approximately 300 km from Tokyo. There are less than 24,000 Indians in Japan and till the writing of this piece we had not received reports of any Indian casualties. Even the 5-6 Indian families living in Sendai were reported to be safe. Our embassy has set up a 24-hour control room and a helpline. Another feature of this earthquake was how well documented it was. Almost every Japanese is armed with a cell phone and a camera and within minutes of the quake, YouTube was flooded with video eye-witness reports. The Japanese are an incredibly resilient people and they will get through this tragedy as they have with so many other natural disasters. Kobe, where I live, was almost destroyed by the Great Hanshin-Awaji earthquake of 1995 which took more than 6,000 lives. Today it is a vibrant, thriving metropolis. Emergency services swung into action within a few hours of the quake and reconstruction went ahead with remarkable speed. Events such as these are also lessons in compassion and solidarity. My in-box is flooded with e-mails from friends and acquaintances from all around the world enquiring about our safety. My mobile phone kept ringing till well past midnight with calls from anxious relatives. But most of all what earthquakes and tsunamis teach us is humility. Despite all our technological accoutrements, our ingenuity and precautions, we still remain at the mercy of Mother Nature. Even as we enjoy her abundant gifts we must beware her wrath. Vikas Swarup is the Consul General of India in Osaka-Kobe and the author of QandA on which Slumdog Millionaire is based and Six Suspects. URL of the article: http://www.dnaindia.com/world/report_the-day-the-quake-hit-japan_1519216-all